Self Sabotage: Are You Your Own Worst Enemy? 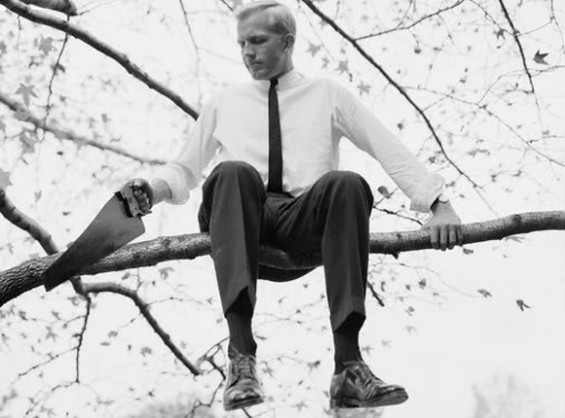 We have met the enemy and he is us. When it comes to sabotaging our health it’s quite often true. There are things we do almost daily that throw us off track in the battle of the bulge. For starters, do you start the day dehydrated? One of the best and cheapest ways to give your metabolism a jolt is to drink water – 20 ounces is good – shortly after waking. Why? During sleep, your body’s metabolic function slowed, and unless you woke up in the middle of the night to swig some water, it didn’t receive any fluids. Water fires up your metabolism, hydrates you, helps your body flush out toxins, gives your brain fuel, and may even make you eat less.

How many cups of coffee did you drink today? Plenty of studies indicate that caffeine can boost your metabolism in the AM. But nutritionist Amy Shapiro, founder of Real Nutrition NYC, says that guzzling coffee and other caffeinated drinks all day could actually work against you. Caffeine is a natural appetite suppressant. If you’re constantly consuming it, you may not eat much — or realize how hungry you really are — until you get home for dinner. “Not eating enough throughout the day can make your metabolism sluggish,” she says. “By the time you eat dinner, instead of immediately using that food for energy, your body is aggressively storing it as fat, just in case it will be deprived again.”

Iodine probably didn’t cross your mind when you thought about self-sabotage, but are you getting enough iodine? If you only use sea salt, you don’t. Sea salt has cachet, especially when paired with chocolate or caramel. What it doesn’t have is iodine, a key element that gives your thyroid gland what it needs to get the job done. The thyroid gland helps to regulate your metabolism. If you don’t have enough iodine, it’s unable to produce thyroid hormones, and your metabolism can grind to a screeching halt. Most table salt is iodized; just a half-teaspoon will provide 100% of your RDA for iodine. Or you can also eat seaweed, cod, shrimp, navy beans, and eggs, all of which are great sources of iodine.

Have you completely cut carbs from your diet? Although it’s true that eating too many refined carbs can get in the way of your health and weight-loss goals, eating too few can have a similar effect. That’s because when we exercise, our muscles need carbohydrates’ stores of glycogen for energy; if they don’t get enough, they can’t grow. That’s bad because the more muscle you can get and keep, the more calories you’ll burn at rest. But that’s not all. With your muscles starved of energy, you won’t be able to exercise as intensely as you otherwise would. That means fewer calories burned while active. Have a serving of oatmeal, sweet potato or brown rice prior to working out to keep that metabolism revving.

If your meal schedule is more erratic than the weather in Michigan, you could be trashing your metabolism. Ready to do some simple math? Figure out how many calories you need to achieve your desired weight and evenly divide that number by the 3, 4 or 5 meals and snacks you eat per day. Aim for each of your meals to be roughly this size. Why? Research from John Moores University in Liverpool found that women who fluctuated between eating low- and high-calorie meals were less happy with their bodies than those whose plates contained a similar number of calories from meal to meal. But it’s not just a fluctuating size that can derail your weight-loss goals. A Hebrew University study from 2012 found that mice that were fed high-fat foods sporadically gained more weight than mice that ate a similar diet on a regular schedule. Experts suspect that eating at the same times every day trains the body to burn more calories between meals.

And lastly, do you enjoy a nightly cocktail – or two? Sad news, folks: When you have an alcoholic drink, you burn less fat. What fat you do burn, you burn more slowly than usual. That’s because the alcohol is used as fuel instead. Quaffing a couple of martinis can reduce your body’s fat-burning ability by up to 73%! That’s a scientific finding that should leave you shaken and stirred. But not everything in life is about “fat burning.” Enjoy that cocktail once in awhile. Just don’t make it a nightly habit.