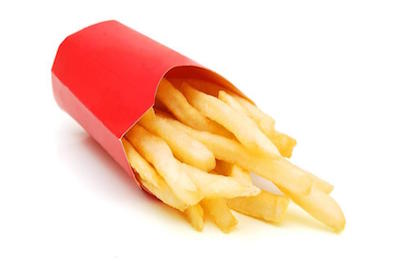 Need another reason to stop eating fast food? For over 30 years, fast-food chains have relied on the chemical industry to keep grease and oil from soaking through burger wrappers and french fry cartons. “Few questioned the safety of the specially coated food packaging until the early 2000s, when lawsuits uncovered the history of a class of chemicals that were widely used in consumer goods with practically no government oversight.” McDonald’s, Burger King and other chains pledged to stop using the chemicals and manufacturers began to phase them out. Last year the Food and Drug Administration banned the use of three chemicals in food packaging, but some fast-food restaurants continue to rely in part on grease-resistant packaging made with structurally similar chemicals that remain largely unknown to independent researchers (many of whom are concerned about potential health risks). In yet another study, a third of the samples collected from McDonald’s, Burger King, Starbucks and other restaurants contained traces of PFOA, one of the chemicals banned by the FDA, though the study does not identify which chains sold packaging with the substance.

A new research study, published in the January issue of Environmental Science & Technology Letters, “highlights the long, often difficult process of identifying new chemicals in the marketplace and determining if they can cause harm. It also raises questions about corporate branding. McDonald’s and Burger King, for instance, have promoted their packaging as ‘PFOA-free,’ meaning it doesn’t contain banned PFCs. Fluorine, however, was detected in samples collected from both chains — indicating companies have embraced chemicals related to PFOA. “

“We just don’t know enough about the safety of these new chemicals,” said David Andrews, a senior scientist at the Environmental Working Group who co-authored the study with researchers from federal and state agencies, universities and other nonprofit organizations. “Since there are other options out there, this should be a wake-up call for these companies.” (Chicago Tribune)