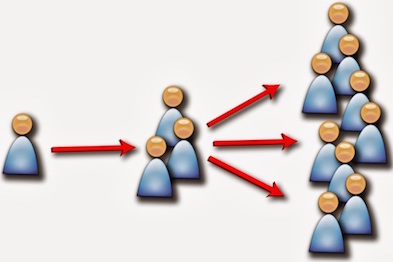 Does one person’s good mood have far-reaching effects? A recently published theory states the answer is yes. The researchers go as far as saying that people you don’t even know can influence your happiness. In other words, if a co-worker’s friend is having a great day you could be influenced by that happiness.

These are impressive numbers, so do you believe someone else’s mood has an influence over you? Can happiness be contagious? I say, “Yes!” I see it everyday in my line of work. Someone shares a funny story with me and I pass it along to other clients and my family. I spread the joy. On the flip side if someone comes to a training session angry over office politics, I feel it and I carry some of that with me for a short while.

I think feelings, good and bad, are contagious. I would go even further than just saying feelings are contagious. I think people are very influential over one another. For example, I think how people eat is influenced by whom they are with. It has happened on more than one occasion when Chris and I have met other couples for dinner. When it comes time to choose food the other couples will insist we order first. They gauge their meal by what we order. They wait to see what the personal trainers will eat and then they decide.

I don’t think this is uncommon. Food choices are dependent on who surrounds a table. I will go even further to say whether a person will or will not exercise depends on whom they hang out with. I firmly believe this. If you hang out with your friends in front of the TV, you’ll stay planted there. Maybe once in a while you’ll go to the movies, but for the most part you’ll just sit around with your friends.

So, I pose these questions to you: Do you agree with me? Are moods contagious? Is lifestyle contagious? Have you ever influenced a situation? Or, do I assume I am way more influential than I really am?